Alright, summer vacation! Time to do some reviews and I wanted to do this one for a while now. I’ll first explain the title for you: It’s Battle Waitress Asahina Mikuru from the Suzumiya Haruhi no Yuuutsu series, by Atelier Sai. When I saw her in the box and bought her, it looked so cool! But when I was home and had it on display for a while, I became very disapointed.

Sure! It looks really awesome if you see it like this, but there are some major problems with this one!

First problem: While the pose is really awesome, this jumping forward thing, it does mean the whole weight is supported by one leg. Especially in these hot summer days, it has giving me one major problem: it has started leaning. If you don’t know what it is, Danny Choo tackled the subject. I actually have it supported by a can and my tv remote right now (which gave the proper support on the angle of the leg).

Not only is this needed to fight against the bending, it’s also necessary for her not to fall out of the base! The metal connecting the foot with the base is way too short and she’s tipping over.

If I remove the support, it looks like this: 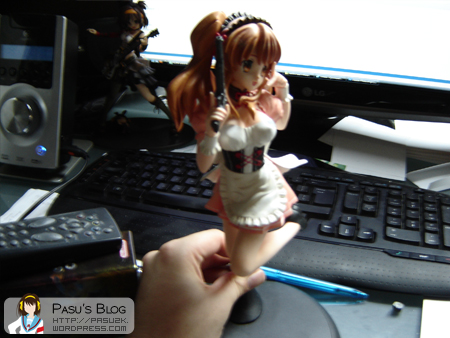 I suppose I can glue the metal in the base, since the other side is also loose in her leg as well… But I shouldn’t have to do that! Sure, I’ve seen reviews of people not having this problem, but I think it’s worth mentioning.

Now on to the (mostly…) good stuff! 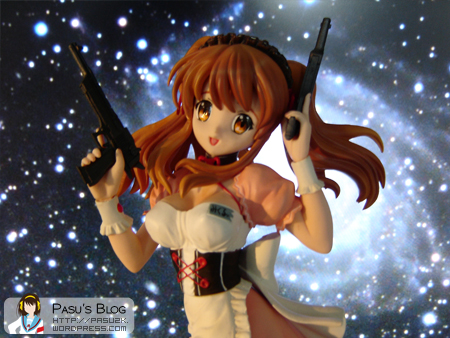 She comes with two sets of hands! As you can see in the photo’s a bit higher I like to go for the ‘One gun + Mikuru Beam’-pose myself. But again, another little complaint: 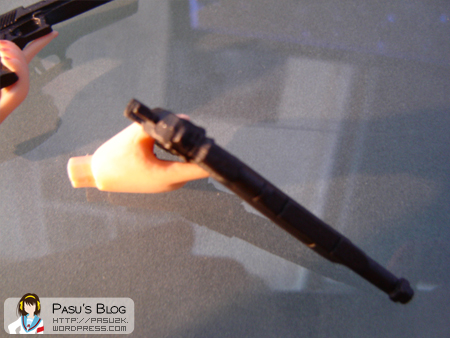 One of the guns don’t really fit in her hand! It keeps falling out, which is so annoying >_<;

However, this was easily solved by sticking some kneed-able eraser on it~

Also, why don’t the finger go through the holes of the guns? The official art clearly shows it like that! You can bend the fingers in, but they won’t stay like that. Oh well, any policemen would tell you you’re not supposed to run around with a gun AND putting your finger through the hole like that anyway, in danger to shoot on accident, anyway.

Pantyshot! But why bother trying to get some panty shots if you…

…CAN TAKE THE WHOLE SKIRT OFF! Seriously, I never really understood the point to it, but she does have some cute panties worth showing~ 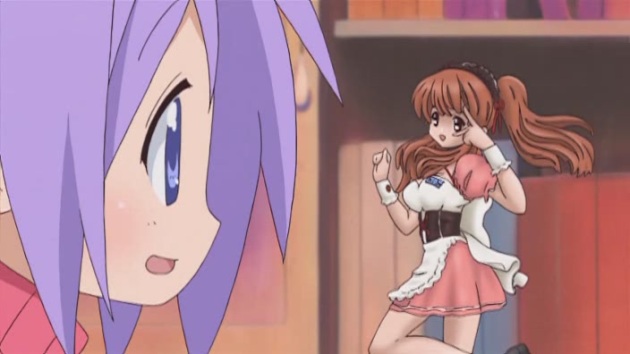 Oh, and did you know that Lucky Star’s Konata actually has this figure in her room? This was also partly why I bought it myself 8D; Luckely, I got it for about half the normal price of 7200 yen, which is way too many for a figure with these flaws. If you do think if getting one of you own (and why not, it’s a nice figure and most people don’t have problems with the base): there are two special editions as well. One looks like this one, but with her blue Mikuru Beam-eye, and one with a black dress instead of a pink one.