The new figma from WonFes

Wonder Festival Life For You!! 11 was today~ For those who don’t know, it’s where figure manufacturers show their upcoming releases. Max Factory was there with quite some new figma’s! Wcloudx already did an excelent coverage of all the figures, so I suggest heading over to his blog for photo’s of all of them. I’ll only go into detail for the new figma’s.

I’ll start with the last two girls of K-On!

Yui, Mio, Mugi and Ui were already announced, but now we’ll also know how Ritsu and Azunyan will look like:

They’ll all come in the first half of 2010.
Yui is already released last January, Mio will be up in February, Mugi in March, Ritsu in April and Azusa in May. Yui’s younger sister Ui will only be sold at WonFes and GSC online store.

This one probably doesn’t surprise anyone, but it seems Black Rock Shooter will get her own figma as well! No date given yet. 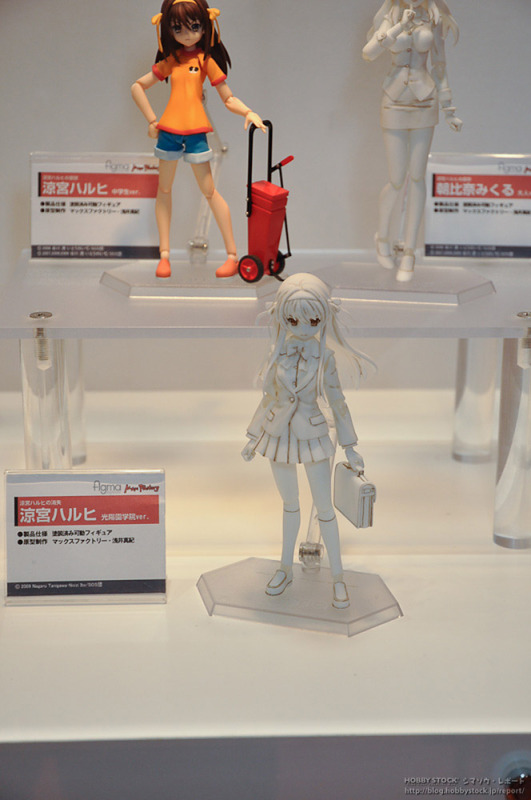 Next up are three new Haruhi-related figma’s. Two of them are they younger versions of Haruhi, and the other is the adult version of Mikuru.

Another Saber from Fate/Stay night. This is her fifth already! Quite a popular lady~ Will be out in June.

Evangelion will also see her debut in the figma departement. Rei and Asuka have already been released in the Fraulein Revoltech line, but it’s the first for Makinami Mari Illustrious I believe. No date given yet though, should be out in the Summer.

This one I wasn’t expecting. It’s Michael Jackson! Ohhh I really need to get this one for some creepy photo’s with his smile like that 😀 Will be out in July.

5 responses to “The new figma from WonFes”