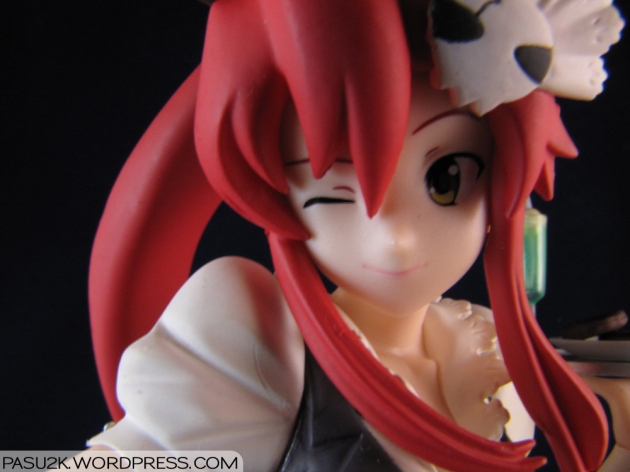 Today we’ll take a look at two figures, released as prices for a raffle by SEGA: Yoko and Nia in waitress uniform, both part of the so called Gurren Lagann EX PVC Figure Series 02. Of course, those raffles aren’t held here, but those figures are usually found in stores rather cheaply~ Especially considering the high quality! 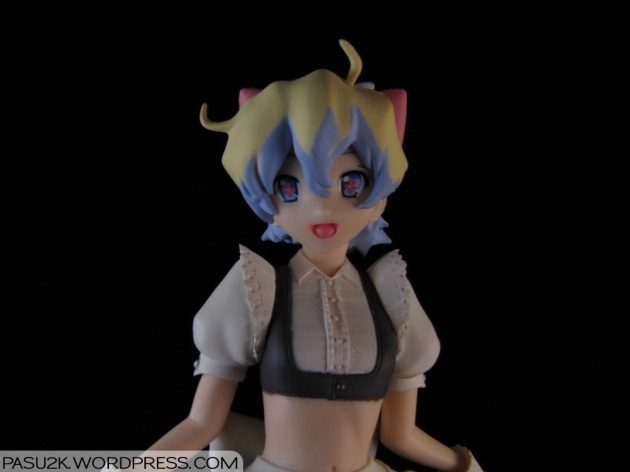 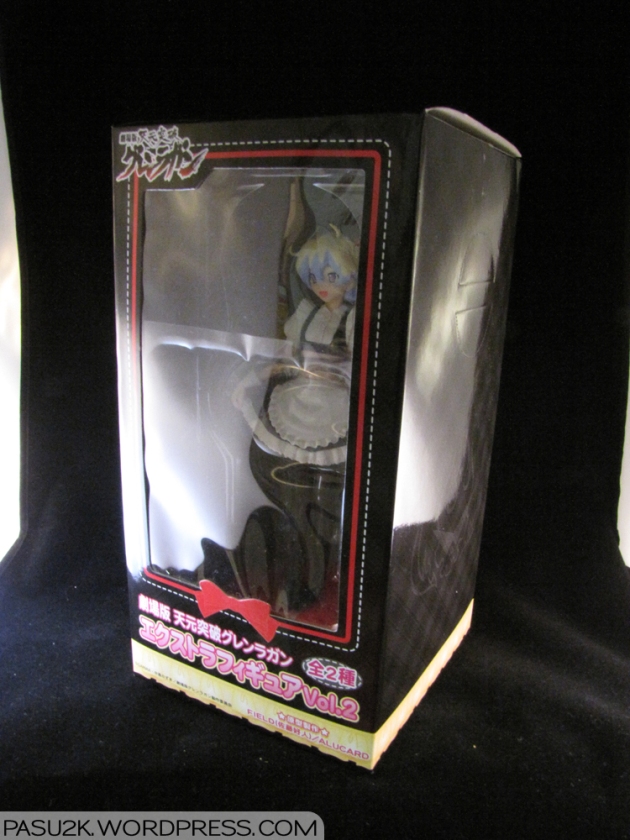 Nia is a mysterious young girl found by Simon sleeping in a capsule in the middle of a dump site. She has had no prior contact with humans except her father. She is very curious, pure and innocent, because of a sheltered childhood in a peaceful environment away from all the battles occurring in the outside world, and because she had only recently gained sentience. During her travels with the Dai-Gurren Brigade, she discovers the harsh realities of the world and has a very close relationship with Simon throughout the story.

Watch out: low quality picture warning: couldn’t get the reflection of the box… Well the box is nothing special really, both figures also come in the same box. 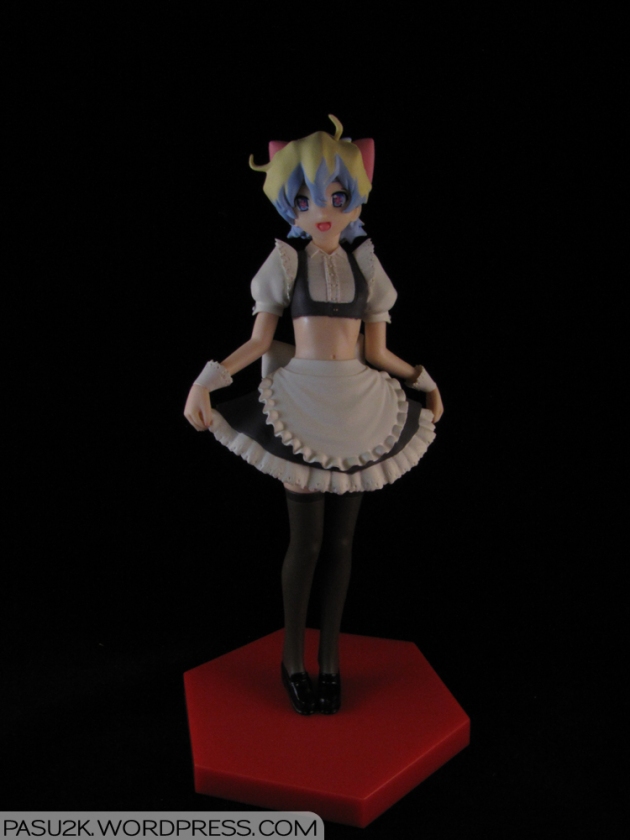 Nia looks surprisingly cute in a waitress uniform. She stands like she greets the entering customers~ 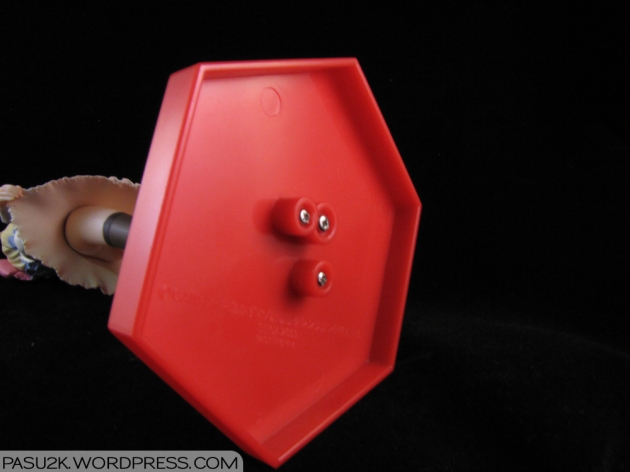 First thing I noticed was the both girls are screwed tight on their base. This makes sure they won’t tip over, which was a problem with another figure I reviewed. It does make it hard to place the two together for a group shot, which is a shame.

Nia has some special eyes. This is partly because she’s half beastman, the enemy of the series.

The figures are pretty detailed for such a cheap price. The frills on her uniform look lovely. 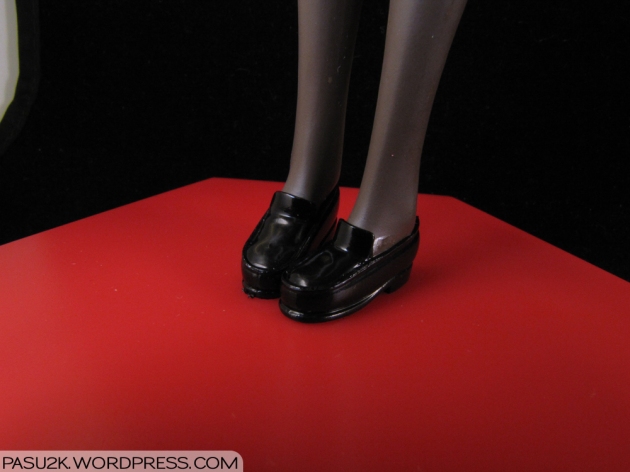 Of course, no uniform is finished with nice shiny shoes. And they sure shine! 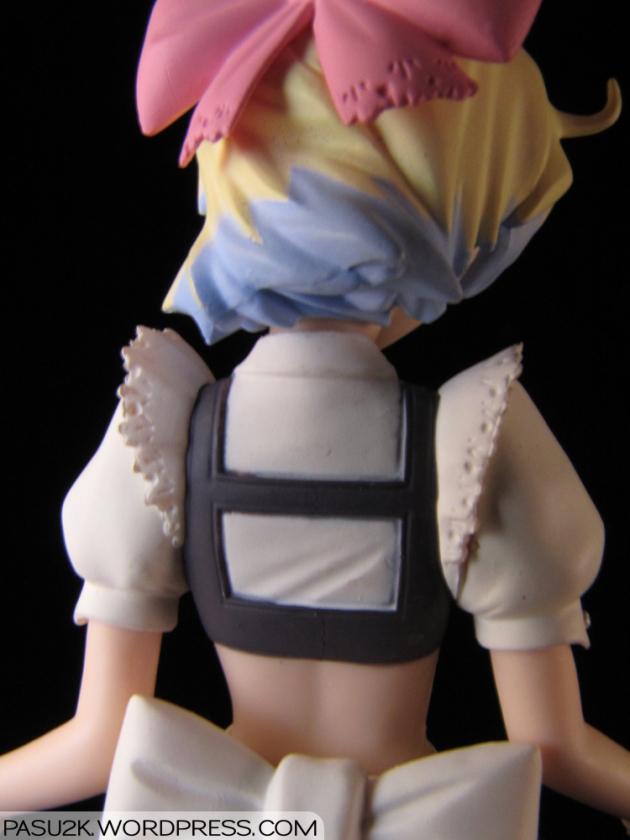 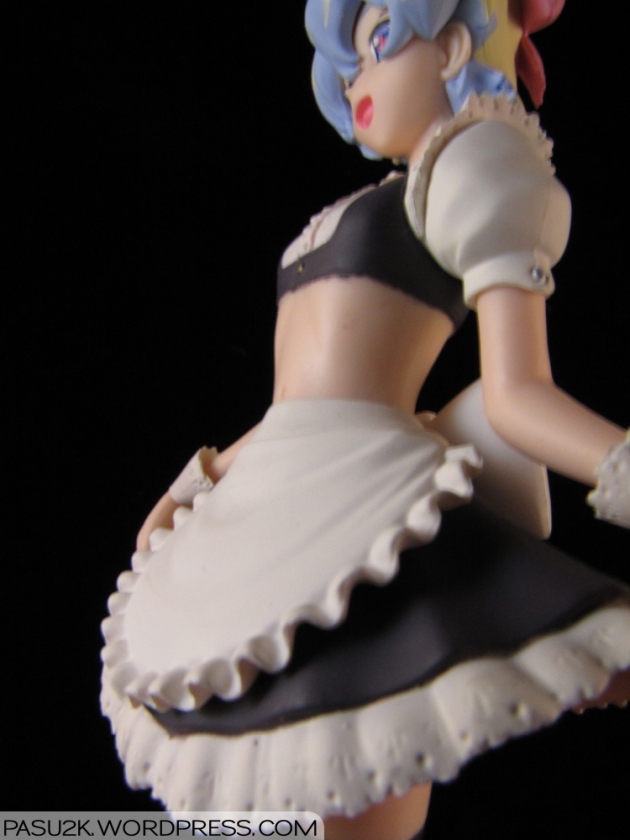 You’d think wearing such a uniform would give constant pantyshots, right? Well, I try to avoid them with my regular photo’s, but for you wondering:

Next up is Yoko! 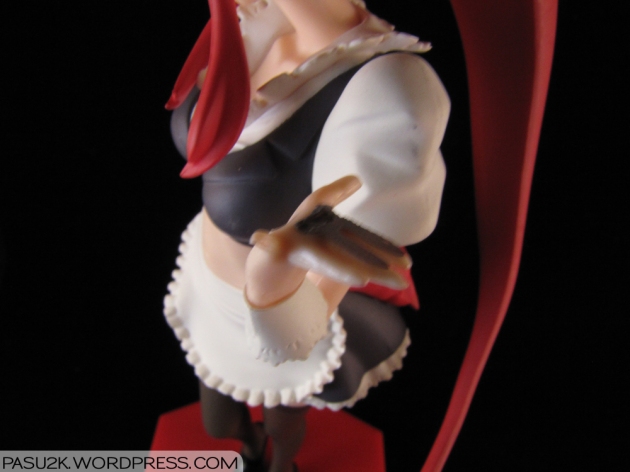 Wait, what’s that silver on her hand?

Oh no! The plate broke off, before I even could take her out of her box! I guess it’s a bit fragile, but nothing a bit of glue can’t fix!

This does give me the opportunity to look at the plate in more detail. The drink is glued on the plate, because I’m sure it’ll tip over if it wasn’t. The donuts on their plate are not, so you can move those around.

There, a bit of Bison Tix and it looks as new. 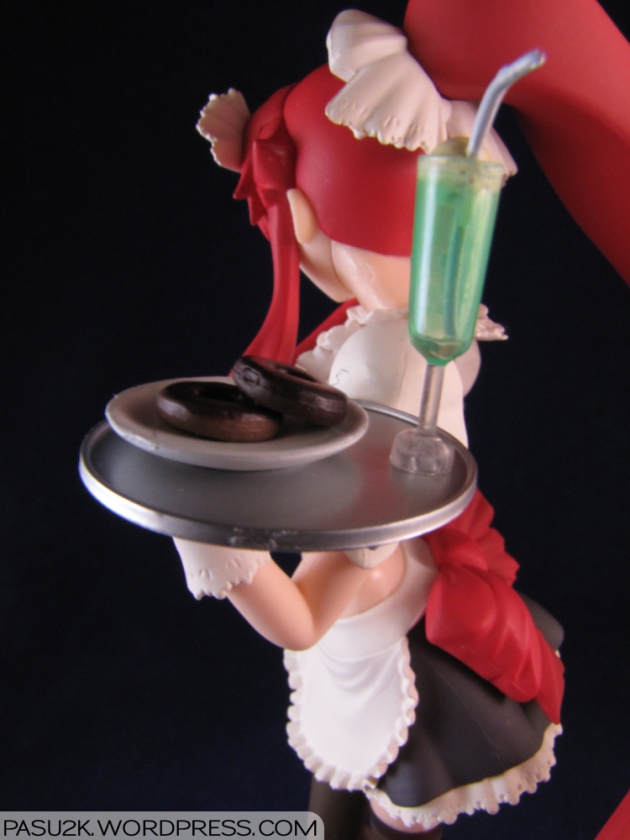 No wonder it fell off. How do you balance a plate like that in real life, holding it with just three fingers and the drink on the far end? She must have quite some muscle in those fingers! 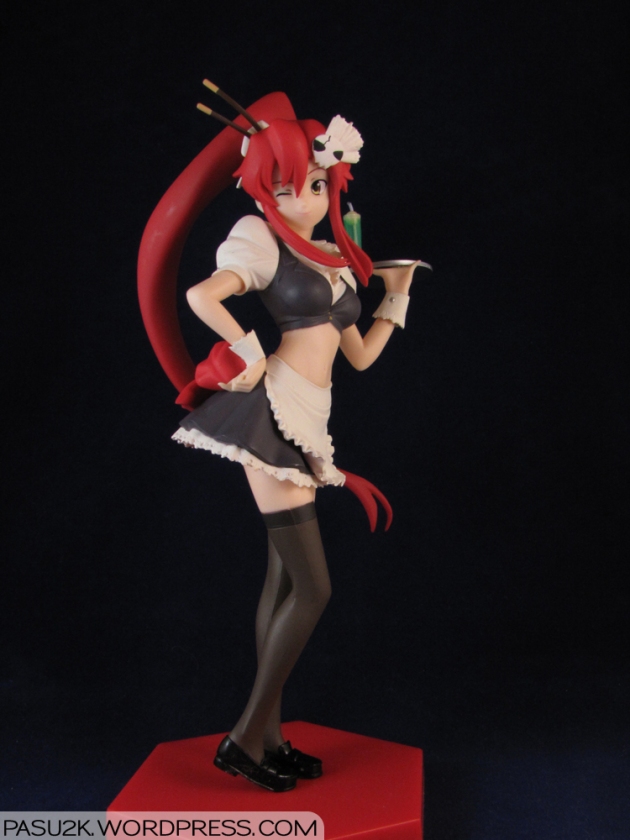 Enough talk about the gravity-defying plate, let’s take a look at Yoko!

Yoko Littner is a young woman from Giha’s neighboring village of Ritona. She had been tracking the Gunmen, which subsequently crashed through the surface and into Giha. She wields an extensive arsenal of weapons and has substantial experience fighting the enemy. She uses her outstanding soldiering skills and wise counsel to advance the war of liberation. She wears short shorts and a bikini top: as she states in episode 5, she avoids clothing which restricts her movement in combat situations. Due to her looks, several characters are instantly attracted to her including Simon and Kamina. She loves children and has a dream to become an elementary school teacher.

Where Nia looks just cute in a waitress uniform, Yoko just looks sexy. She doesn’t mind striking a pose to the customers to win them over. 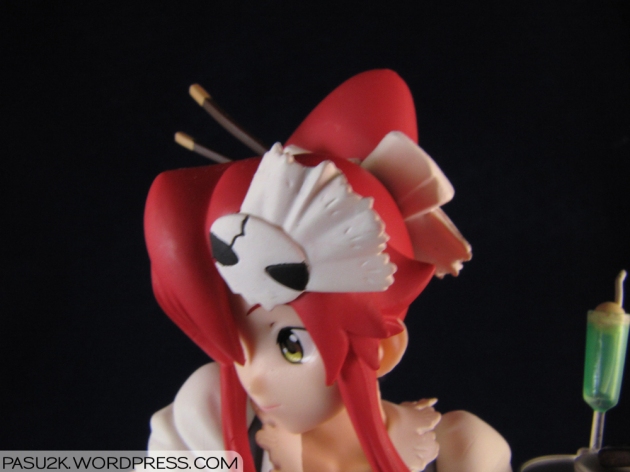 Yoko still wears her skull clip, but they added some frills to make it fit more with the rest of her costume. 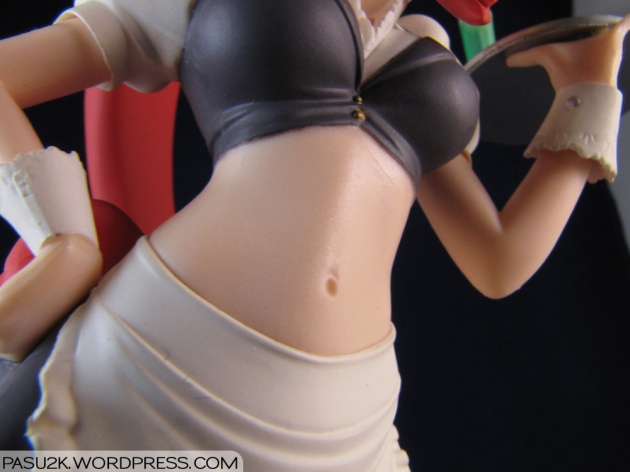 This last one is probably my favorite shot ^_^; 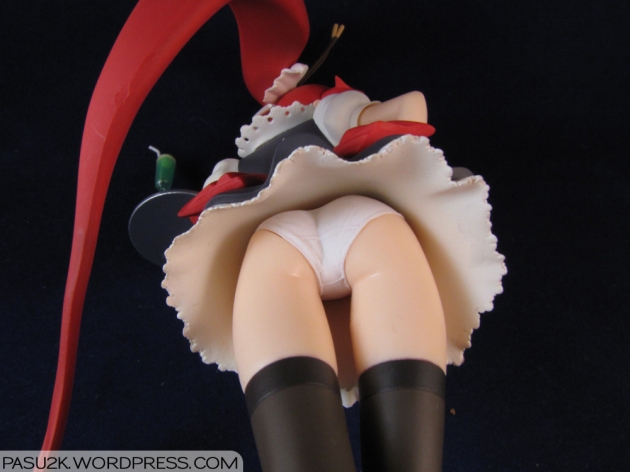 Of course, pantsu for Yoko as well~

I’m glad I got these figures. I never mind having some waitress figures, because they always look cute in those costumes (both 2D and 3D). If you are a fan of Gurren Lagann or just waitress figures in general, I can suggest getting these. Yoko sold out pretty quickly, but Nia is still in stock at Archonia for about €15, which isn’t bad at all!