I told myself to never get a Fraulein Revoltech, because almost everyone agrees the figma versions are usually the better version to get. The Fraulein-series has pretty much died off in the past year, while the figma series just keeps expanding. Now, Revoltech is coming with a new line of action figures called the SFX-series. Action figures with sound effects? And they have a Buzz Lightyear, too? This must be awesome, right? Right?! No.

Before I go into all the bad stuff and frustration this figure has cast upon me today, let’s take a look at the box. It’s actually quite nice! The front folds open like a book and you can see Buzz Lightyear held in place with metal wires like those Barbies and Action Men of a long time ago. 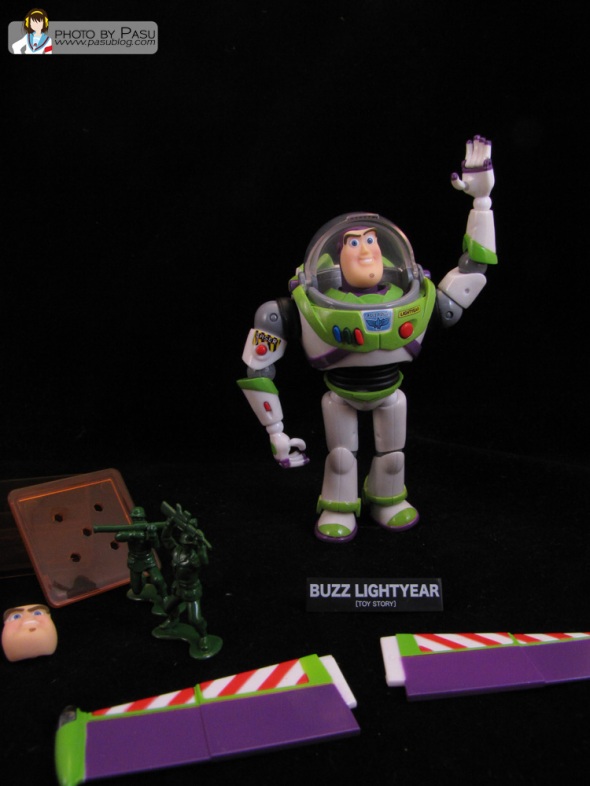 Buzz Lightyear, which I’m pretty sure you all know of the Toy Story movies, comes with some extras, including 3 army men, wings, an extra face and this weird bar with his name on it. 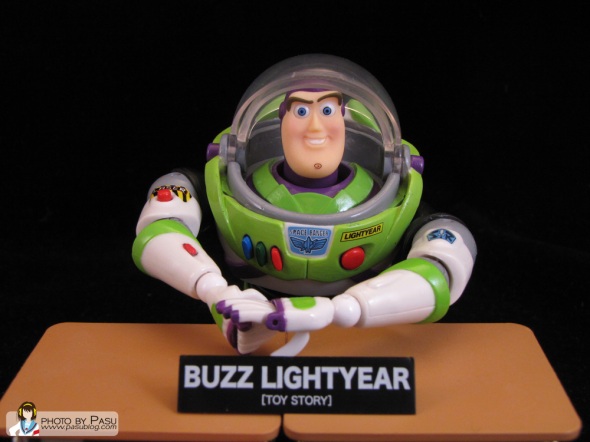 It looks like those things you put on desks so people know your name, doesn’t it?

You know how figma’s have those real nice plastic bags to store the extras in? Apparently Revoltech figures come with this teeny tiny box, which has room for the extra face and one army man. Maybe you could fit in his name bar as well, but a bigger box for storage would’ve been nice.

Alright, I can’t avoid it any longer. Let’s talk about the figure you should have bought it for: Buzz himself. First problem: he can hardly stand up! Sure, other figures are usually hard to put on their feet, but they come with a stand, like the figma figures. Even the Fraulein Revoltech figures get something similar to help them stand up! Also, even though the line is called SFX, they figures do not make sound effects. SFX stands for Sci-Fi here. What? SFX stands for Sci-Fi, which stands for Science Fiction? What’s wrong with just using Sci-Fi then? And why the X?

It seems his left (viewer’s right) leg is longer. His foot is also a bit tilted. I guess it’s a problem the joints aren’t fully inserted, but I really tried to fit them in further, but I just couldn’t.

Also, and this is supposed the be the selling point: the joints suck! You know how figma joints bend smoothly? Revoltech joints click in certain degrees. Let’s say I want to bent an arm 5 degrees, it wouldn’t allow me, because it would either stay at zero degrees, or click right on to 15 degrees. This is why I can’t get his left foot flat on a surface. It’s very, very annoying. 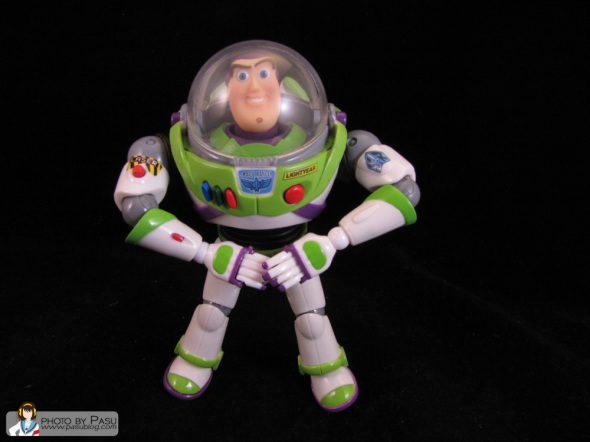 His arms work okay, though it feels kind of weird to move them. His elbows have the Revoltech joints, but his shoulders do not. At first, I thought I was breaking it, like twisting it out of its socket, but it’s supposed to be that way, I guess.

Weirdly, you can extend his arms! This was done for more ‘posing options’ but his hands could reach each other already anyway. This just looks scary.

His hands are pretty bad as well. The thumb is posable (hardly), while the other four fingers are connected together. This makes posing hard, and it allows only for a gripping pose, or a fist. Replacable hands would have been nice.

Buzz also comes with wings, but to place them in his back, you have to get the folded versions out first. They’re so tightly in place and you can’t really firmly get a grip on it, so I couldn’t get it out. So that’s another waste. 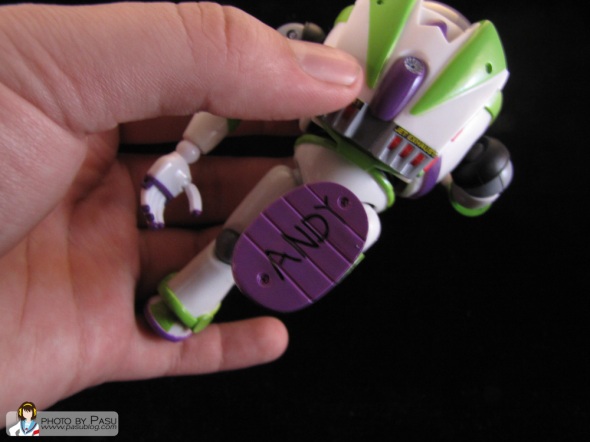 Isn’t there anything nice? Well if anything, it’s nicely detailed. We have the ANDY marking on the bottom of his foot, like in the movies. 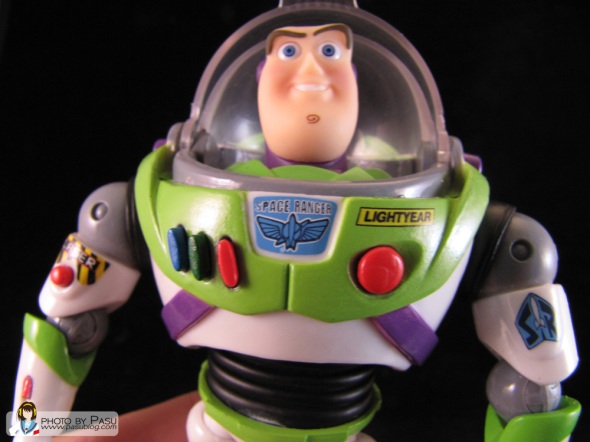 We also have all the buttons with the tiny text on it. Sadly, they don’t make the sounds they usually would. 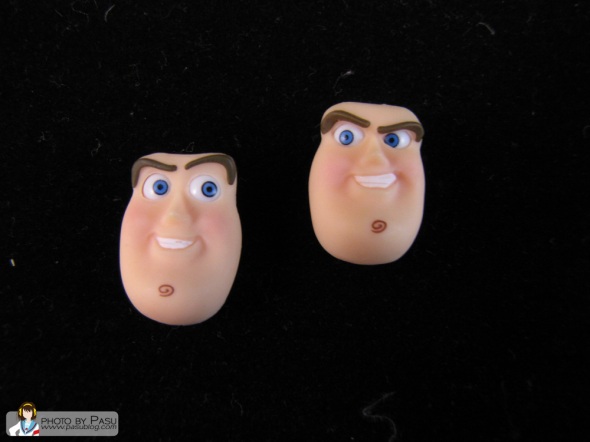 Lastly, the faces are nice. The expressions are very similar though. You can move the eyes on the backside to make him look in another direction. Don’t move his eyes to far though to a side, or you won’t be able to place it back into the head without moving them… This also happened at the pose in the header of this post. I just couldn’t be bothered to fix it again after 3 tries. I think the flaws there fit nicely with the whole figure. 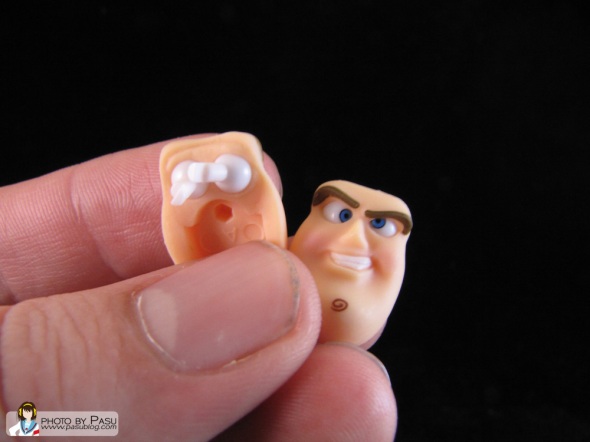 Here’s where I usually tell the people who might be interested in this to buy it. Today I tell you: don’t buy it, even if you’re a Toy Story fan. Posing this figure is extremely hard because of the ‘special’ Revoltech joints and it has trouble standing up anyway. This version of Buzz is also about half of what he is in the movies, so it’s not a 1:1 conversion. I saw 1:1 Buzz figures in the local toystores that could do more than this one for the same price! If you are inclined to get a Buzz figure, just look there.

Figures, Review buzz lightyear, revoltech, revoltech sfx, toy story
← What I’ve been up to 2010 in review →